Day 1 is in the books and money was thrown around like never before!  The total dollar value for contracts agreed to yesterday was well over the $1B mark.  This is coming to fruition as revenues from TV contracts are making their way to the salary cap which is up to $94M (with an $84M minimum spend).  Let’s take a quick look at the deals we like, the ones we think are just eh, and the ones we hate.

Joakim Noah to the Knicks – Not everyone loves this one but we do.  He was hurt last year so his numbers don’t look great but this contract is much more than Mozgov and Noah has much more upside (even at this age).

Mike Conley staying with the Grizzlies – Sometimes the best thing you can do is keep your own at home and this is one of those times.

Dwight Howard to Atlanta – I like this more for Dwight than for Atlanta…let’s see if coming home will help him bounce back.

Chandler Parsons to Memphis – If he can stay healthy, him and Conley will form a great backcourt for years.

Evan Fournier – Said it before with Conley and this feels like the same boat; sometimes the best thing you can do is keep your own.

Andre Drummond staying in Detroit – SVG has a few tricks up his sleeve and a great big to build around.  Smart to lock him up.

Bradley Beal staying in Washington – Not everyone will agree here and I understand the injury concerns but he’s only 23.  After investing so much in the past few years giving him and Wall a chance to lead this team together is good business.

Jeremy Lin to Brooklyn – Might be my favorite move of the day.  Brooklyn needs a way to get butts in seats as they rebuild (without 1st round picks) and what better way to do it than with Linsanity back in NY.  Great fit for Jeremy too.

Ish Smith to Detroit – Good point guard at a great price. SVG up to his old tricks.  This could be a team to watch in the East very soon.

Hassan Whiteside staying in Miami – He gets paid and keeps the support system that has kept his hot headedness in check.  Win win.

Jordan Clarkson staying in LA –  Might be Lakers best move this off season. Young guard with talent that is no where near his ceiling.

Nick Batum staying in Charlotte – Portland shouldn’t have traded him. Ultimate glue guy that fits nicely with Kemba and Marvin.

Kent Bazemore staying with the Hawks – My only opinion here is that UA should be paying him for helping recruit Steph to the brand!

E’Twaun Moore to New Orleans – He was heavily coveted and this is an upgrade over oft injured Eric Gordon but NO is more than a few pieces away.

Justin Hamilton to Brooklyn – I’m not even sure who this is so at $3M a year seems like a great deal.

Solomon Hill to New Orleans – Once again an upgrade along with Moore. I can only assume Tyreke’s time in NO is coming to an end.

Mirza Teletovic to the Bucks – They definitely didn’t overpay for him given the market but he definitely doesn’t get too many excited either.

D.J. Augustin to the Magic – I really don’t have any opinion on this.  Wasn’t  fan of his at Texas and haven’t ever been a fan in the NBA.

DeMar DeRozan staying in Toronto – I understand Toronto’s play here as well as his motivation to stay but I just don’t love the backcourt combo they have with Lowery.

Joe Johnson to Utah – JJ left the nets to find a winner, then signed with a team that is still a few pieces away.  He should have let the dust settle and found a contender

Jeff Green to Orlando – The Magic have a log jam at the forward spot and need to let Aaron Gordon grow; this hinders that.

Matt Dellavedova to the Bucks – Milwaukee paid way too much for a back up point guard who had a few good post season games two years ago.

Evan Turner to Portland – This is the Blazers doing Blazer things; they should have used this money to resign their own and let the team grown.  Allan Crabbe will be a better pro than Turner has been.

Al Jefferson to Indy – This team is getting older and slower with this move.  They are the anti-Warriors.

Timofy Mozgov to the Lakers – Don’t understand this at all in any way shape or form.  He doesn’t fit the new NBA and he definitely doesn’t help the young guys grow.

After last nights amazing game I’m suffering from basketball withdrawal so now’s a good of time as any to post our Final NBA Mock Draft. With Simmons meeting with the 76ers, looks like that’s the direction they’ll go. Barring any trades (I’m looking at you Boston, Chicago, Minnesota, New York, and Portland) here’s our final mock:

Let us know what you think!

Not too long ago I posted about our current favorite breweries in Portland.  True to form I’ve been spending plenty of time at them!  Recently, I took another trip back to Ex Novo and thought I’d write up a deeper dive. 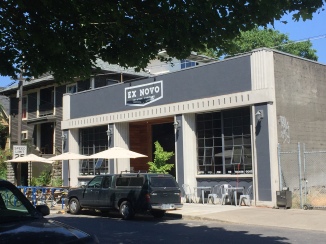 It was a sunny 100 degree Sunday so my buddy and I decided to walk the mile over to the brewery.  To say we were thirsty by the time we got there would be the understatement of the week.  As soon as we sat down we ordered a cold The Most Interesting Lager In The World.  It hit the spot!  This beer is a Mexican lager brewed with Vienna and Pilsner malts with a hint of flaked corn. 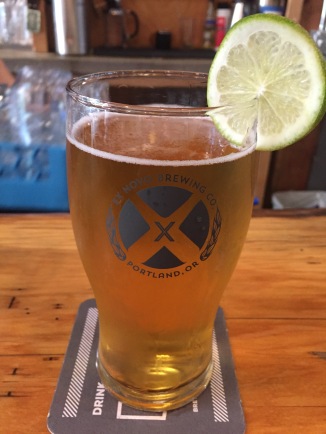 As I mentioned in the previous article, Ex Novo is a non-profit brewery that aims to donate 100% of their net profits to a variety of causes.  These causes include Friends of the Children, IJM, Impact NW, and MercyCorps.  They’ve been open for two years in the Eliot neighborhood of North Portland.  They have an inviting atmosphere that is perfect for families (the bathrooms actually have baby changing stations complete with diapers) as well just grabbing beers with buddies. Sitting at the bar for a few hours will show that many from the neighborhood come in often and the beertenders/waitstaff know them well.  There is also plenty of sidewalk seating to enjoy the nice days and they brew the beer in the back. The perfect one stop shop brewery!

The first couple pints of lager went down well so we decided to branch out and sample a few of the current seasonals.  I’m not a huge sour beer fan but the beertender talked me into trying their newly released version, Cactus Wins The Lottery!.  This Berliner Weisse with prickly pear was surprisingly easy to drink and actually refreshing.  We also tried the Stiff Upper Lip which is made with British malts, East Kent Golding Hops and a London Ale strain.  Might have been the lagers talking but ended up buying bottles of both to drink later. 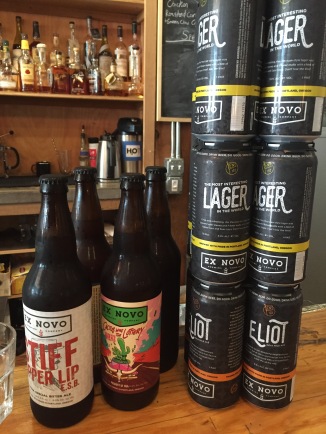 Per the usual, each trip to Ex Novo makes me wonder why I don’t get there more often. If you’re in the city looking for a brewery that exemplifies everything that makes the Portland beer scene so amazing, this is the place to visit.

This San Francisco brewery is named after the amendment to the United States Constitution that repealed a previous amendment (the 18th), which had prohibited the manufacture and sale of alcohol and was in place from 1920-1933.

21st Amendment Brewing is known for being ahead of the craft brewing curve when it comes to the can trend.  The cans that contain the beer are as well-known as the beer itself, artistic and full of historic references surrounding the topic of prohibition and U.S. history on the whole.  The cans – made by a Portland, Oregon company called TBD, include renderings of Americana such as the Statue of Liberty, FDR, astronauts, signers of the Constitution and various other bits of U.S. history. These cans stand out.  I recall being impressed by them some years back when I received a shipment in the mail as part of a beer-of-the-month club membership a friend had gotten me.  But the product goes far beyond the packaging and theme.  21st Amendment makes good beer.  It adds fruity quirks – watermelon and grapefruit among them – to its brews, and everything from lights to porters and delicious IPAs as well. 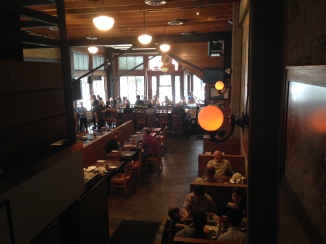 The setting is rustic and inviting, with a large rectangular bar on the main level and an upper indoor balcony that overlooks the main level.  The upper balcony is a slick set-up with multiple screens for watching sports.  AT&T Park is just a few blocks away.  The Saturday afternoon crowd was a mish-mash of age, gender and background, feeling welcoming across the board.

My favorite beer was the Blah Blah IPA, which had been released just a week prior to my visit and was recommended by the friendly bartender just a minute or so after I sat down.  I was more than impressed by the quality of this one and I’ve had my fair share of IPAs.

If you are in the Bay Area and you enjoy a good beer and brewery experience 21st Amendment is a must.

We’ve made it to June and individual workouts are in full swing. Been doing our best to keep up on all the happenings. Two things that are standing out most at this point are Boston still being the wild card at number 3 and Marquese Chriss’s stock rising. Here’s our latest mock:

Let us know what you think!

The Westgate Las Vegas Superbook has the Golden State Warriors as roughly 2-1 favorites going into the NBA Finals against the Cleveland Cavaliers.  Interesting call given that the Cavs took two games off of the Warriors in last year’s finals without two of their biggest stars.  It’ll be interesting to see how the numbers swing if Cleveland can steal Game 1 or Game 2 on the road.  Happy betting…

There’s very few times in life when two things you love come together so beautifully.  I was lucky enough to have it happen tonight at Kimo’s/Rattle Snake Mountain Brewery.  Former NFL lineman and Super Bowl Champ, Kimo von Oelhoffen who has played for the Steelers, Jets, and Eagles, has opened a brewery in Richland, WA.  It’s been a long time favorite that I’ve finally decided to write about.  This is a great sports bar that has an equal number of TVs showing the NBA Western conference finals and the Stanley Cup Finals.  On top of that they brew their own beer and have a gorgeous view of the Columbia River.  Honestly speaking, their food leaves a little to be desired but their beer more than makes up for it.  The go-to brew here is the Helluva Honey, a mix of their Honey Red and their Helluva Hefe which is a combo of Hefeweizen and American Wheat Ale.  Going during happy hour is an added bonus as they sell pitchers for $8 a pop (4 and 1/2 beers per pitcher). Although they don’t have plans to distribute any time soon, it’s definitely worth a stop in if you ever have a reason to be in the area.

(Source: http://www.businessinsider.sg) Courtside seats to Monday night’s game between the Golden State Warriors and Oklahoma City Thunder are selling for nearly $30,000 a pop on online resale sites. StubHub currently has two VIP courtside tickets to Game 7 of the Western Conference Finals available at $29,680 apiece, while TicketMaster has a few tickets going for $25,938 per […]

via Tickets for the Warriors-Thunder Game 7 are selling for almost $30,000 online — Kopitiam Bot